Governor Eric J. Holcomb and the Indiana delegation joined provincial officials from China’s Zhejiang Province this week to renew the Indiana-Zhejiang sister-state relationship, celebrating the economic, cultural and educational connections shared between the two states. In Hangzhou, the provincial capital city, the delegation also met with Indiana and Chinese businesses with operations in Zhejiang Province, establishing new connections and strengthening partnerships across the region.

“Now in the fourth decade of our sister-state relationship with Zhejiang Province, this visit is the perfect opportunity to reaffirm our commitment to growing together,” Gov. Holcomb said. “Our 32-year-old partnership has blossomed into a transpacific friendship that’s fueling business, academic, government and cultural exchanges on both sides of the Pacific. We look forward to what the future brings both our states in the decades ahead.” 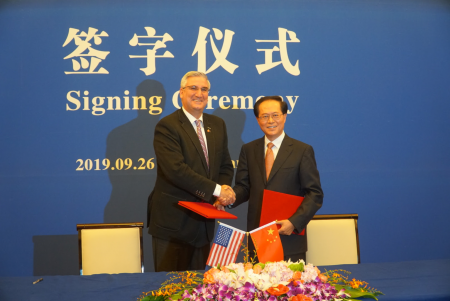 Indiana has shared a sister-state relationship with Zhejiang Province since 1987, when the agreement was first signed by former Indiana Governor Robert D. Orr. In 2017, Gov. Holcomb joined officials of Zhejiang Province in Indianapolis to commemorate the 30th anniversary of the partnership, and this week, the Governor again affirmed Indiana’s commitment to Zhejiang, renewing the sister-state agreement with Zhejiang Party Secretary Che Jun. 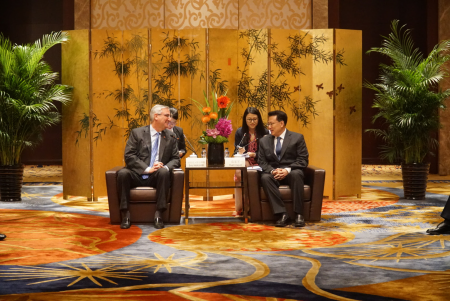 In Hangzhou, the delegation also met with Zhejiang Governor Yuan Jiajun to further emphasize Indiana’s commitment to strengthening the mutually-beneficial partnership between Indiana and Zhejiang Province. Since its inception, the Indiana-Zhejiang sister state has increased economic ties and cultural and educational exchanges between Indiana and China, and, last year, the Indiana Economic Development Corporation established a business development office in Hangzhou to further support and strengthen the many opportunities for collaboration. 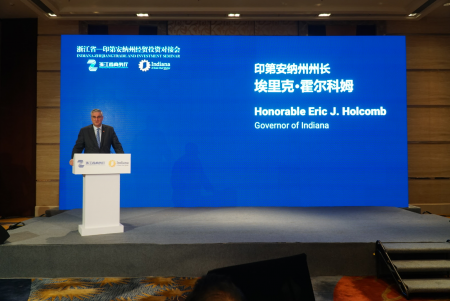 The Indiana delegation met with representatives of the region’s economy during a business roundtable with Gov. Yuan and the Zhejiang Department of Commerce. Gov. Holcomb offered remarks highlighting Indiana’s pro-growth business environment and promoting future investment opportunities, and Secretary Schellinger provided an overview of Next Level initiatives currently underway to enhance connectivity, talent and quality of place across the state for years to come. 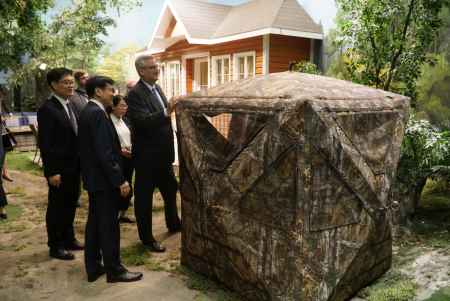 Indiana and Zhejiang Province already share many business ties. In Hangzhou, Gov. Holcomb and the delegation met with leadership of China-based Zhejiang HengFeng Top Leisure and its Indianapolis-based subsidiary, Westfield Outdoors. HengFeng is one of the largest exporters of outdoor leisure goods, producing more than 10,000 products, such as foldable chairs and beds, tents, fishing tackle and hunting gear, and garden furniture for customers worldwide. The company’s Indiana operation, Westfield Outdoors, was established in 2004 and supports R&D and U.S. sales for the products manufactured in Zhejiang and sold at popular retailers like Cabela’s, Bass Pro Shops, Target, Walmart and Costco. 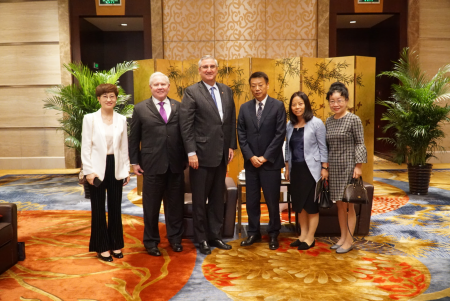 The Governor and Secretary also met with leadership of Zimmer Biomet China & Hong Kong to offer the state’s continued support on both sides of the Pacific Ocean. Zimmer Biomet, which is headquartered in Warsaw, Indiana, and launched its China operations in 1994, employs 2,000 associates in China and 10,000 in the U.S., with nearly half of its U.S. employees located in Warsaw. 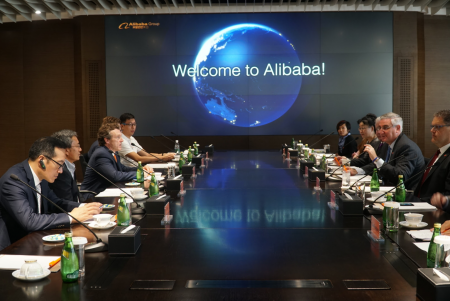 Additionally, the Indiana delegation visited the global headquarters of Alibaba Group, which offers a technology suite of e-commerce platforms, cloud computing, digital media and entertainment, and innovation services. The group met with executives to discuss opportunities for Alibaba to support Indiana companies on its online retail platforms as well as the company’s new strategic partnership with Salesforce, which operates its Salesforce Marketing Cloud operations in Indianapolis. With this partnership announced in July, Alibaba is now the exclusive provider of Salesforce to enterprise customers in mainland China and Hong Kong, while Salesforce is the exclusive enterprise CRM software suite sold by Alibaba.