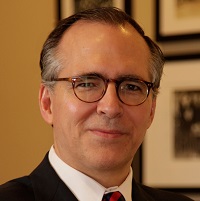 Chris Douglas is founding partner and managing director of C.H. Douglas and Gray Wealth Management. An eighth generation Hoosier, he earned his Bachelor’s degree from Princeton University’s Woodrow Wilson School of Public and International Affairs and his Master’s in Business Administration from the Wharton School of Business at the University of Pennsylvania. He was decorated for his service as an officer in the US Air Force and is fluent in Mandarin Chinese.

Chris has been named by Indianapolis Monthly to its “Best of Indy” list in the area of financial planning, by the Indianapolis Business Journal to its “Forty under 40” list of influential people in business, and to the Indiana Leadership Forum. In 2010 he received the Indiana leadership Forum’s Founders Award for Achievements in Business. He has been named to Indianapolis Monthly’s list of “Five-Star Wealth Managers” every consecutive year from 2008 through 2016, a designation awarded each year to the top 7% of those scored by respondents in a scientific survey of clients and peers.

A member of the Board of Advisors of Dance Kaleidoscope, Indiana’s premier professional contemporary dance company, Chris serves also on the Finance Committee of the Indiana Historical Society, one of the United States’ oldest and largest historical societies. He is a member of the Columbia Club and the Indianapolis Chamber of Commerce, and he sits on the Indiana Advisory Committee of the US Commission on Civil Rights.